Announcing a new age of carbon free energy production, these two ring wing turbines are turning around producing 50 MW of electrical energy each. We need this type of infrastructure worldwide to match the climate goal.

The movie illustrates a mutation leap for wind turbines concerning size and power. Delivering 50 MW per unit, these giant wheels with a diameter of 250 meters surpass by far the dimensions of conventional turbines. Just one of them wheels can substitute up to twenty conventional wind turbines. A complete rotation lasts more than a minute - flattering the observer's eye with a slow revolving motion. Although being huge, the ecological impact of "Repowering" will be comparably harmless due to the scale effect of this innovation and due to the relatively slow motion of the wind turbine which reaches maximum efficiency when lambda times 3.5 the wind speed. Please contact me to learn more about the new power house and other innovative features coming along with this invention which will help to sustain a friendly climate on our one and only planet earth.

These elegant spoked wheels are turning around slowly and steadily somewhere on a shallow bank in the North Sea. The rim of the RES - Mega Wheel consisting of a circular rotor blade contributes around one third to the torque created by the wind turbine. On its outer surface the rim carries a multitude of flipped over blades which are hardly visible in this perspective. Featuring an asymmetric profile, the circular rotor blade also defines the rotational speed of the wheel, provoking stall when the wheel surpasses a defined rotational speed. Fifteen radial rotor blades are connected to prestressed steel cables on the windward side while fifteen more prestressed cables connect the rim with the hub. In my opinion future wind turbines with an output of 50 MW per unit will look like these ones. Another advantage of the system can be seen in the fact that the circular rotor blade creates thrust opposite to the direction of the wind and therefore is relieving the turbine's load bearing structure. 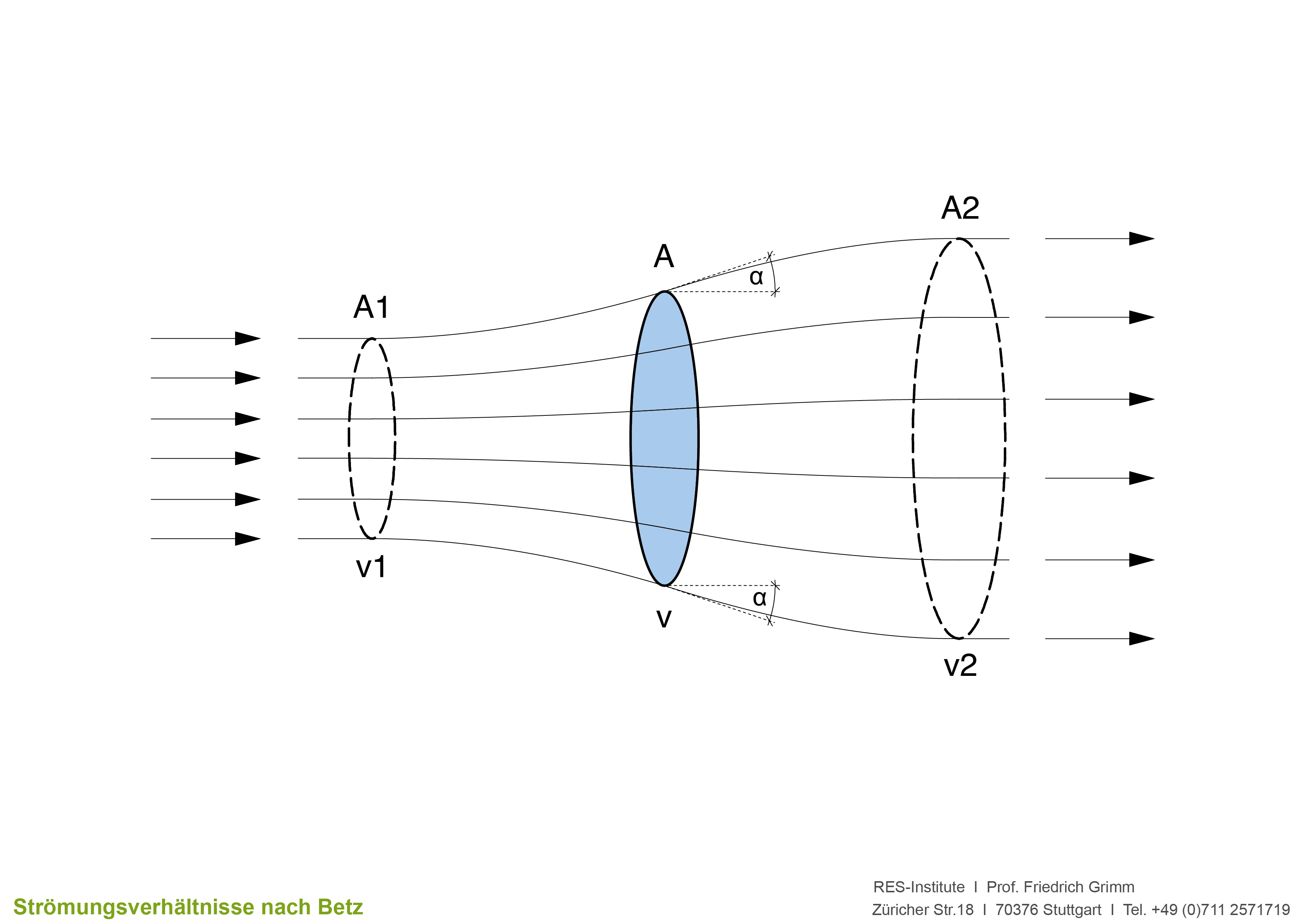 Extracting energy from the wind in the rotational level (A) will cause a widening of the flow tube. According to the Betz's Law, a theoretical maximum of 59,3% can be extracted from the kinetic energy of the wind. In accordance with Bernoulli's Law, this has two consequences: Firstly, the wind speed (v2) will be slowed down to the half of the original speed (v1) and secondly, the pressure within the flow column increases causing a widening of the flow tube effecting a doubling up of the leeward cross section area (v2) in comparison to the windward cross section area (A1). In the rotational level (A) the conical angle (α) can be used as angle of attack for an asymmetric profiled ring shaped wing which will cause uplift at the turbine's outer perimeter. From this uplift, tangential propulsion and thrust opposite to the direction of the incoming flow can be derived. In this context it is interesting to notice that the fluid dynamic diameter of the turbine is much greater than given by the turbine's structural dimensions. 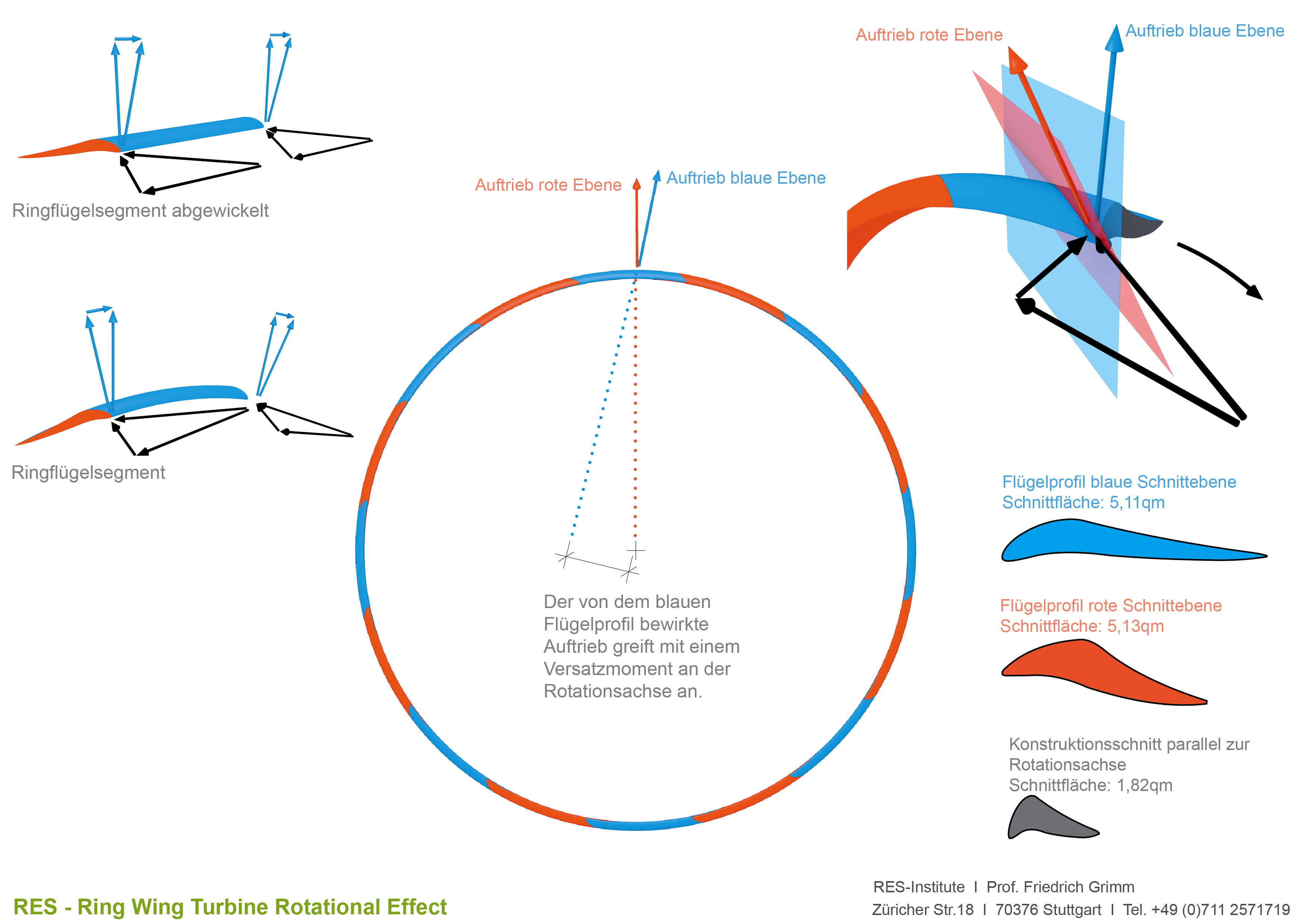 Drawing 2 - The Rotational Effect of the Ring Wing

The drawings show a circular shaped ring wing divided in 16 segments. On the left side, one segment is shown as an unwound wing with aerodynamic forces derived from the wind speed, the rotational speed and the conical angle of attack summing up to resulting inflow. (please see also: RES-α) The uplift force always being perpendicular to the resulting inflow points windward and in the direction of rotation. From the uplift force a tangential propulsion force and a thrust force opposite to the direction of wind can be derived. Looking at different sections of the ring wing on the right side, it becomes quite clear that the wind will overflow the ring wing in the blue plane, because the blue profile has less resistance than the red profile belonging to the red plane. Here the red profile would have to be overflowed effecting more resistance than the blue profile because it is not only larger in cross area but also is not appropriate for laminar flow. In the red plane, having an intersection with the focus of the ring wing uplift forces would eliminate each other when attacking at center. In the blue plain however, the blue profile offers minimum resistance for the incoming flow and uplift forces will be rotational effective because they attack with an offset to the center of the wheel. The grey profile shows the structural section of the ring wing parallel to the rotational axis of the turbine. 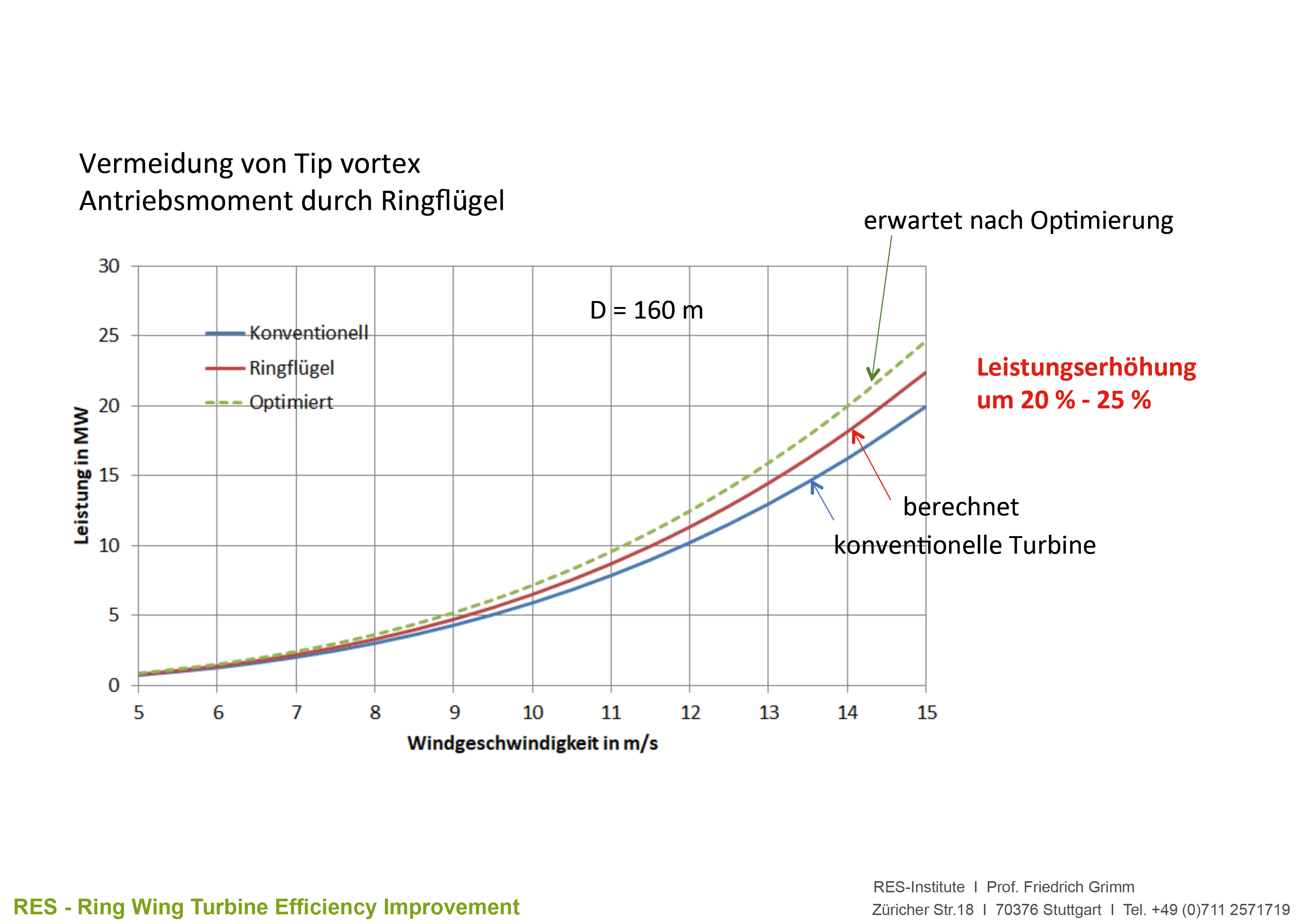